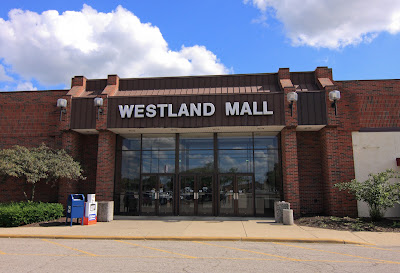 A parting snapshot of the WESTLAND MALL Main Entrance. It provided access to two North Mall concourses. Flanking these would be stores and services such as D.O.C. Eyeworld, Diamonds Forever and Modern Nails.
Photo from Wikipedia / Sam Howzit
WESTLAND MALL
West Broad Street / US 40 and Georgesville Road
Franklin County, Ohio

The third of Columbus' directionally-designated malls was added to an existing F & R Lazarus. This 1-level (80,000 square foot) store had opened, on August 16, 1962, as the Columbus-based chain's first branch.
WESTLAND MALL was developed by Cleveland's Visconsi-Mead-Jacobs Company (a precursor of the Richard E. Jacobs Group). The complex, officially dedicated on February 12, 1969, occupied a 59.9-acre plot, located 6 miles west of the Ohio State House. The site was adjacent to the future route of the "Outerbelt"/ Interstate 270 Expressway, with the section running by the mall opening to traffic in August 1970.
Open-air in format, WESTLAND was anchored by the aforementioned Lazarus, which had had been enlarged into a 2-level (171,000 square foot) structure. There was also a 1-level (104,800 square foot) J.C. Penney and 2-level (176,900 square foot) Sears. Charter inline stores included Orange Julius, The Limited, Waldenbooks, Gray Drug, House of Fabrics and an F.W. Woolworth 5 & 10. Courts and concourses were decorated with sculptures and fountains created by Cleveland artist Charles E. Van Duzer.
WESTLAND MALL underwent a major renovation in 1982. Its mallways were fully-enclosed. Lazarus was enlarged again and now encompassed 215,000 square feet. When construction dust settled, the shopping hub covered approximately 860,000 leasable square feet.
The Cinecom Theatres Westland Cinemas I & II debuted on July 1, 1971. The venue was installed in a southeast parking area strip center that had opened, along with the mall, in 1969. An all-new megaplex was built southwest of the original twin. It opened, as the General Cinema Corporation Westland 8, in early 1986 and was in business until late 2000. The theater operated as Dollar Cinemas Westland between 2004 and 2008.
Commercial competitors of WESTLAND MALL included COLUMBUS CITY CENTER (1989) {in downtown Columbus} and MALL AT TUTTLE CROSSING (1997) {8.4 miles north, in Columbus}. The decline of WESTLAND MALL began in the late 1980s, when Sears was downsized into a 1-level operation. The new MALL AT TUTTLE CROSSING snatched the Penney's store from WESTLAND in July 1997.
By the dawn of the 21st century, WESTLAND MALL was on life support. In November 2002, the past-its-prime property was sold to Sammy Kahen and Jack Kashani, two Beverly Hills-based realtors. A plan to redevelop WESTLAND, following the tenets of New Urbanism, was announced.
The mall would be demolished, leaving Sears and Lazarus intact. A city street grid was to be imposed, with open-air shopping and office spaces constructed. Unfortunately, the redevelopment stalled after the failure of a similar plan at Columbus' NORTHLAND MALL.
The owners of WESTLAND sold a fifty-percent share in the center to Columbus-based Plaza Properties, in April 2005. The Beachwood, Ohio-based Krone Group was enlisted as a redevelopment and management agent. The earlier renovation proposal was revived and a new mall moniker -WESTON TOWN CENTER- unofficially adopted.
Lazarus was rebranded as a Lazarus-Macy's on August 1, 2003 and a Macy's on March 6, 2005. The store was shuttered in July 2007. This created a stumbling block to any progress toward the revitalization.
Alas, the WESTON TOWN CENTER project never got off the ground. Wisconsin-based Menard's home improvement centers expressed interest in building a new store at the site, but eventually cancelled this plan. The mall's downward spiral hastened.
By May 2011, the long-delayed reinvention of WESTLAND MALL was seeming to gain impetus once more. The 400 million dollar Hollywood Casino Columbus had been built on the site of an abandoned factory, which stood across Georgesville Road from the complex. Said casino opened on October 8, 2012.
It was hoped that the new casino would serve as a catalyst for the long-delayed redevelopment of the moribund mall, which was shuttered in November 2012. An exterior-entranced Sears remained in business, but closed for good in September 2017. In the early 2020s, plans were being drawn to redevelop the abandoned and deteriorating mall as a mixed-use retail and residential facility.
Sources:

The Columbus Dispatch
www.labelscar.com
Franklin County, Ohio tax assessor website
www.cinematreasures.org
http://www.movie-theatre.org / Mike Rivest
www.thekronegroup.com
https://www.teepublic.com
"Westland Mall" article on Wikipedia
FAIR USE OF WESTLAND MALL IMAGES:
The photographs from The Columbus Metropolitan Library illustrate a key moment in the mall's history that is described in the article. The images are not replaceable with free-use or public-domain images. The use of the images does not limit the copyright owners' rights to distribute the images in any way. The images are being used for non-profit, informational purposes only and their use is not believed to detract from the original images in any way.