An electric or gas range was essentially the same in 1947 and 2017. The first microwave oven appeared in 1947, but this appliance did not become a standard fixture in the home until well into the 1980s.


The typical electric refrigerator was quite a bit different in the mid-century than it is today. Although "frost-free" models became available in 1950, they were something of a novelty for years thereafter.

Back in the days, mom would have to spend hours "defrosting" the conventional, non-frost-free 'fridge. All food in the freezer compartment would have to be removed. The task of getting rid of several inches of ice that had accumulated on the inside walls of the freezer was a tedious, messy chore.

This was done (carefully) with an ice pick or (haphazardly) with several splashes of warm water onto the affected parts. Of course, the thawing, dripping mess would need to be mopped up several times during the defrosting ordeal...which had to be done every couple of months. 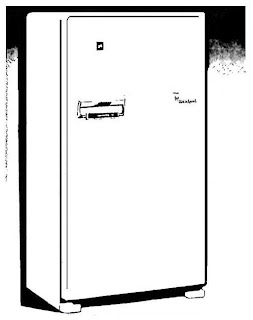 A circa-1953 refrigerator. Its tiny freezer compartment might accommodate a box of ice cream, a few "tv dinners" and a couple ice cube trays...if it was not frozen over due to not having been "defrosted" in the recent past. Refrigerators of this era define the term "clunky". Walls, using substandard insulating materials of the time, were incredibly thick, taking up much interior space. Doors opened and shut tightly with latches. 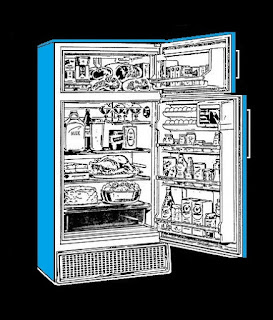 By 1960, more modern refrigerators were on the market. Technology had provided more efficient insulating materials, making slimmer walls -and additional interior space- possible. The latch-operated  doors of yesteryear had been replaced with better closing apparatus.

Although all mall articles and special features on this site have been researched, we can not guarantee that all information is 100% accurate. We do our best with (sometimes) limited reference material. Contemporary newspaper write-ups are our primary source of information. These, and other sources, are listed at the end of each article.