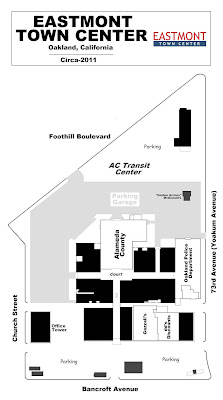 EASTMONT MALL prospered during its early years, but was struggling by the early 1990s. It became a victim of urban blight, but was resurrected from the retail graveyard by some creative remarketing. Although no longer a destination-type retail center, EASTMONT TOWN CENTER now functions as a community and civic hub. 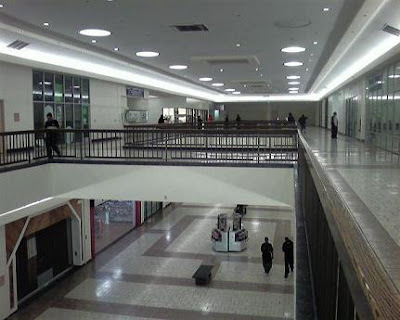 An early 2000s view of the mall's interior. The complex was given a 6 million dollar face lift in 2008.
Photo from www.labelscar.com / "Caldor" 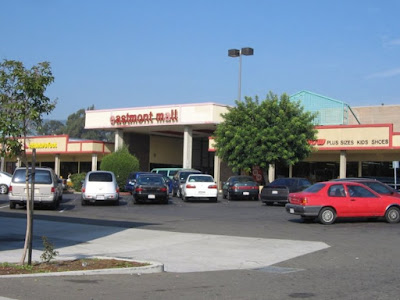 Here, we see the mall's main entry, which cuts through the middle of the 1960s strip center.
Photo from www.labelscar.com / "Caldor"

The fourth fully-enclosed, regional-class shopping mall in the Bay Area was designed by William Pereira and the firm of Burke, Kober, Nicolais & Archuleta, of Los Angeles. The shopping hub was developed and built by the San Diego-based Community Development Corporation, a subsidiary of the Irwin J. Kahn Organization.

The shopping center site, which had contained a Chevrolet assembly plant between 1916 and 1963, was located 13 miles east of San Francisco's Union Square, in the Eastmont district of Oakland.

EASTMONT CENTER, an open-air strip complex, was the first retail structure built. Its Safeway supermarket and Safeway Drug opened for business May 18, 1966, with the remaining inline stores being dedicated in 1967. The 4-level Eastmont Mall Office Building was completed in 1969.

Meanwhile, construction had commenced on the second shopping center phase in 1968. A 2-level interior mall was built. This included a parking garage on three sides and was anchored by a 3-level (206,000 square foot) J.C. Penney. This store was officially dedicated on October 7, 1970.

Over forty inline stores opened for business when EASTMONT MALL was officially dedicated, on November 18, 1970. By December, nearly all of the mall's seventy-four charter tenants were up and running. These included Weisfield's Jewelers, Crescent Jewelers, Taie's Inn, Topps & Trowsers, Pizza Hut, Hickory Farms Of Ohio and Persian Bazaar.

A 2-level (64,000 square foot) Mervyn's opened for business on June 30, 1974. It was the Hayward, California-based chain's 19th location. With this store's completion, the gross leasable area of EASTMONT MALL had been expanded to approximately 676,100 square feet.

EASTMONT MALL started to decline after the closing of its J.C. Penney, in June 1991. The shuttering of Mervyn's, in June 1993, exacerbated the mall's downward trajectory. Soon, the center was viewed as a "blighted mall".

Oakland-based Eastmont Properties acquired the failing shopping venue in 1993. Inquiries to various national chain stores failed to create any interest in leasing space in the seventy-percent-vacant complex. A new remarketing focus was devised.

The old J.C. Penney was retenanted by the Alameda County Health Department. Other spaces in the mall were leased to various government agencies and non-profit groups. A branch public library, a mall tenant since 1983, expanded into a second level in 1997.

The vacant Mervyn's was repurposed as an Oakland Police Department precinct, which opened in February 2001. This was accompanied by the completion of a reproduction "Golden Arches" McDonald's, an outparcel dedicated in mid-2001. Gazzali's supermarket, in the old Safeway space, held its grand opening on June 5, 2004.

In March 2007, the ninety-percent-leased, mixed-use mall, now known as EASTMONT TOWN CENTER, was purchased by a joint venture of the Portland, Oregon-based ScanlanKemperBard Companies and New York City's Pradium Group.

They embarked on a 6 million dollar rehab of the property in July 2008. The interior was brightened and new lighting, skylights and seating areas installed. Moreover, escalators and escalators were replaced and parking areas received new landscaping. The complex was sold in April 2015, with the buyer being Walnut Creek, California's Vertical Ventures.