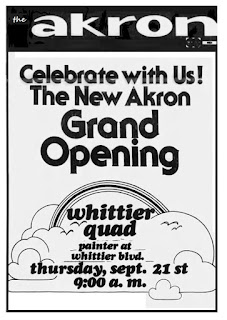 A vintage advert announces the grand opening of The Akron store at WHITTIER QUAD. The dedication was held in September 1978.
Advert from the Thrifty Corporation 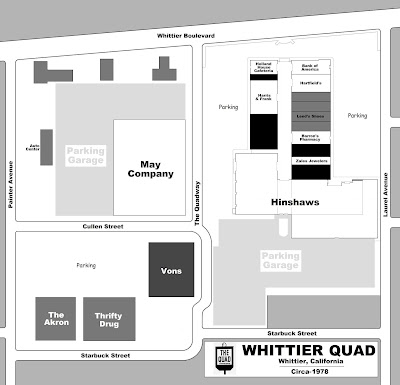 A site plan of the mall from the same time. Hinshaw's had been enlarged in the early 1960s. By the early '70s, the store had expanded into an adjacent supermarket space and an adjoining parking garage had been completed. In 1974, the shopping concourse was enclosed and climate-controlled. On the southwest corner of the site, three outparcel stores were built; Von's (in the late '50s) and Thrifty Drug and The Akron (in 1978). 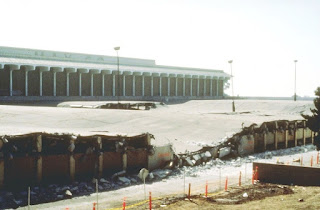 In October 1987, the WHITTIER QUAD complex was damaged by the Whittier Narrows Earthquake. A vacant May Company store was severely shaken, with its parking garage collapsing.
Photo from NOAA (National Oceanic and Atmospheric Administration) 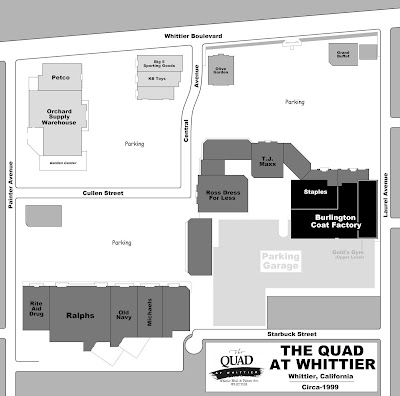 What remained of the mall post-temblor was knocked down. Hinshaw's, which had incurred minor damage, was left standing and was incorporated into THE QUAD AT WHITTIER, a new open-air power center. Structures in dark gray were complete by 1991. Those in medium gray were dedicated in 1992, with components indicated in light gray being finished in 1995.

Although all mall articles and special features on this site have been researched, we can not guarantee that all information is 100% accurate. We do our best with (sometimes) limited reference material. Contemporary newspaper write-ups are our primary source of information. These, and other sources, are listed at the end of each article.