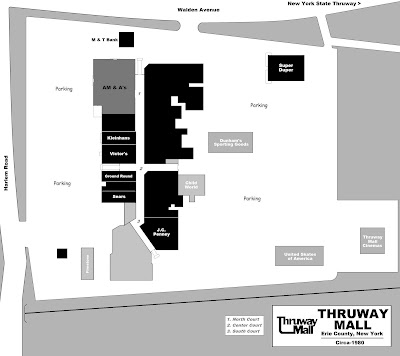 Our third THRUWAY layout is a provisional one, as no contemporary store maps or plans were available. We believe that all stores indicated are in their correct positions. At this time, the mall encompassed 799,100 leasable square feet and housed over ninety stores and services under its roof.

SENECA MALL opened for business in May 1969. The complex covered 700,000 leasable square feet and contained sixty-two stores and services. In its early years, it was a major competitor of THRUWAY PLAZA and MALL.
Graphic from the Pyramid Management Group

Greater Buffalo's super mall, WALDEN GALLERIA, was dedicated in May 1989. The six-anchor complex, with 1.2 million leasable square feet and 185 stores, put the hurt on both the THRUWAY  and SENECA malls. The SENECA property was shuttered and demolished in 1994. THRUWAY closed in November 1995 and was partially demolished in 1997.
Graphic from the Pyramid Management Group 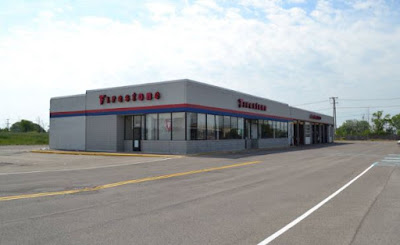 Firestone was on the original list of THRUWAY PLAZA tenants, back in the 1950s. For many years, a retail store and separate Auto Center were operated. These were consolidated into this newly-built structure in the late 1970s.
Photo from http://dlc.propertycapsule.com (DLC Management Corporation)
THRUWAY PLAZA
Walden Avenue and Harlem Road
Erie County (Town of Cheektowaga), New York
One of the earliest post-war shopping centers in the Niagara Frontier was developed by the Sommers Brothers Construction Company, of Iselin, New Jersey. THRUWAY PLAZA was built on a 75-acre site, located 4.6 miles northeast of Buffalo's center city. The 8 million dollar, open-air complex was adjacent to a section of the New York State Thruway that had opened to traffic on October 29, 1951.
Promoted as the largest shopping center in Western New York, the 300,000 square foot strip complex was designed by the Walter Koppel firm of Miami, Florida. Among thirty-three charter stores and services were W.T. Grant, Lerner Shops, A & P and Nu-Way supermarkets, Woolworth's and Neisner's 5 & 10s and 2-level (86,000 square foot) J.C. Penney.
A grand opening celebration commenced on October 16, 1952. The festivities were hosted by Duncan Renaldo, "The Cisco Kid", star of the syndicated western TV series of the same name. Several retail store executives were present, along with officials from the Sommers Company. Cheektowaga Supervisor Benedict T. Holz cut a ceremonial ribbon. Entertainment included animal acts from the Gengler Brothers Circus.
THRUWAY PLAZA was expanded with a western section in the late 1950s. Two new store blocks faced those in the original strip center, creating an open-air mall concourse between them.
A 2-level (16,000 square foot), Buffalo-based Kleinhans welcomed its first shoppers on November 15, 1956. Buffalo-based Adam, Meldrum & Anderson (a.k.a. AM&A's) opened a 2-level (60,000 square foot) location on February 14, 1957. Other new stores included Thom McAn Shoes, Sears Catalog & Appliance and a Firestone Auto Center.
Acme Markets opened a (37,000 square foot) grocery in the early 1960s. It was built as a northeastern outparcel. This was followed by a new AM&A's store, that was added to the northwest corner of the complex in the late 1960s. It encompassed 2-levels and 100,000 square feet. Courts and concourses were enclosed and climate-controlled in 1974, with the shopping hub being re-named THRUWAY MALL.
A South Court expansion was completed in July 1980. It added fifteen stores and services, including a new boutique-type Sattler's. Mall stores at this time included Altier's Naturalizer Shoes, York Steak House, Florsheim Thayer McNeil Shoes, Richman Brothers men's wear, So-Fro Fabrics, Hickory Farms of Ohio, The Fashion Factory and a Child World toy store. The shopping hub spanned approximately 799,100 leasable square feet and housed ninety-three stores and services.
The General Cinema Corporation Thruway Mall Cinema was built as a southeastern outparcel. Its first features were shown on December 16, 1977. Originally a 3-screen venue, the facility was expanded into a 6 -and then 8- plex. The theater was shuttered on November 30, 1999. It re-opened, as the Dipson Theatres Thruway Cinema 8, on June 1, 2001 and morphed into the JGM Entertainment Movieland 8 Theatres in 2004.
Shopping centers in the THRUWAY trade area included SENECA MALL (1969-1994) {4.7 miles south, in Erie County (Town of West Seneca)}, COMO PARK MALL / APPLETREE MALL (1972) {1.5 miles southeast, in Erie County (Town of Cheektowaga)} and McKINLEY MALL (1985) {8.2 miles south, in Erie County (Town of Hamburg)}.
THRUWAY MALL did well until the completion of WALDEN GALLERIA {.8 mile northeast, in Erie County (Town of Cheektowaga)}. This mega mall's first tenants opened on May 1, 1989, with one of its stores being a relocation of the THRUWAY MALL J.C. Penney. AM&A's also moved to WALDEN GALLERIA. Their THRUWAY store went dark on July 28, 1990. Kleinhans pulled up stakes in December 1990.
The abandoned AM&A's building was subdivided, with a (49,800 square foot) Value City Furniture setting up shop in its first floor. A grand opening was held in October 1994. This new store was part of an ongoing shift to remarket THRUWAY MALL as an off-price shopping center. Unfortunately, this new focus could not change the fortunes of the past-its-prime property.
A foreclosure auction was held in September 1994. The Buffalo-based Benderson Development Company acquired the virtually vacant facility for a rock bottom price and shuttered the interior concourse in November 1995.
As one might expect, a raze-and-replace plan had been devised. The first, announced in November 1995, would have demolished only the southern half of the complex. A second proposal, from November 1996, became the accepted plan. 600,000 square feet were knocked down, leaving the AM&A's building and freestanding Firestone Auto Center, cinema and bank structures standing.
News of a prospective retail complex, to be known as THRUWAY CONSUMER SQUARE, surfaced in March 1997. By April, the name had been changed to THRUWAY PLAZA. The first tenant, a 1-level (90,000 square foot) Wal-Mart SuperCenter, opened its doors on January 26, 1998. A newly-built (55,400 square foot) Tops Market opened in December 1999. This was followed by a 1-level (132,300 square foot) Home Depot, which held its grand opening in 2001.
Beachwood Ohio's Developers Diversified Realty acquired the real estate portfolio of Benderson Development in mid-2004 and became the new proprietor of THRUWAY PLAZA. They sold the 572,600 square foot power center, along with fifteen other properties, to a joint venture of Elmsford, New York's DLC Management Corporation and DRA Advisors. This transaction closed in October 2016.
WalMart at THRUWAY PLAZA had pulled up stakes in April. Its vacant store was re-leased in increments. A 12,000 square foot section was occupied by Citi Trends. Planet Fitness (with 25,000 square feet) was dedicated on March 21, 2018. The Movieland 8 Theatres had been shuttered on May 11, 2015. The building was sold to a local church in June 2017.
Sources:
The Courier-Express (Buffalo)
The Buffalo News
preservenet.cornell.edu/publications/Longstreth Branch Store.doc
Information provided by Bill Schultz and Robert Lackameyer, Greater Buffalo residents
https://cheektowagachronicle.com
http://www.tocny.org
http://wnyheritagepress.org
http://www.ddr.com (Developers Diversified Realty)
http://rew-online.com
http://dlc.propertycapsule.com (DLC Management Corporation)
https://buffalostreets.com

Although all mall articles and special features on this site have been researched, we can not guarantee that all information is 100% accurate. We do our best with (sometimes) limited reference material. Contemporary newspaper write-ups are our primary source of information. These, and other materials, are listed at the end of each article.